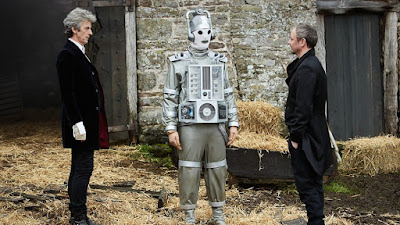 Last week's episode, World Enough and Time, was one of Moffat's best scripts in years. This episode was the closing half of the story. Moffat has previously bungled a number of second episodes. I didn't feel he would this time though, perhaps because there was so much good work done in WEaT that he would have had to make a concerted effort to do so. Also because his four central characters (the Doctor, Bill, the Master, and Missy) were being played by such a talented bunch that it didn't seem feasible. Pleasantly, I was right.

This is not to say this was a faultless piece of TV. It was slow in places. Much of what was wrong with the episode can be attributed to Steven Moffat's propensity to become overly dramatic. I mean, the episode climaxed with the Doctor running through woodland gunning down an army of robots1. That's a level of mindless, empty-headed action heroics not even Colin Baker sunk to. His fetishisation of the Doctor was as prevalent as ever. His fascination with writing companions who are borderline obsessed with the Doctor threatened to be a problem but just avoided becoming one thanks to the trope playing out differently to usual and a final excellent performance from Pearl Mackie.

But really, everything else was great. I've already mentioned Pearl Mackie and she seems like the obvious place to start with praise because this is the last time we're going to get to see her (at least until she gets a Sarah Jane-esque return in 2047). Despite having slightly leaden dialogue in places(due to her spending the majority of the episode as a Cyberman) she gave what is amongst her best performances on the show, getting past the by this point tedious obsessing over the Doctor to focus on the more interesting material given to her. The anger at him having taken ten years to save her, the brave acceptance her inevitable death, and her understanding of the simple farmer stereotypes being fearful of her and allowing herself to be further ostracized to make them more comfortable.

Bill's ultimate fate could be seen as a cop out. I mean, a character from twelve episodes ago appearing out of nowhere, with no hint that this would happen, to inexplicably bring Bill back to life runs the risk of undercutting everything she'd gone through across the previous couple of hours of television. I think it did undercut things to an extent but not enough to be ruinous. Bill dying would have been sad and moving but it would probably have been too much given the fate of Missy and the Doctor's death coming in the next episode. Better to give her a happy ending in which she finally got together with the-one-that-got-away(-to-become-a-time-travelling-space-puddle) from The Pilot and triggered the Doctor's regeneration with a tear, which, y'know, she cried because she was sad her friend had died. It's trite and schmaltzy but it worked as a believable reason for Bill to abandon the Doctor. And this isn't a show that should shy away from leaving its characters happy the majority of the time2.

Michelle Gomez also gave a good final performance. Hers was all about keeping us guessing as to Missy's true intentions. Which she handled well, playing a suitable level of detachment from the Doctor and coyness with the Master. It could be seen as disappointing that she didn't get to give us one final rendition of the utterly crackers character she initially played but, really, we've had that enough to satisfy. It was far more interesting to see her as a Master finally ready to repent and work with the Doctor.

Her death scene was one of the best things she's gotten to do on the show. She made the sacrifice of leaving with her previous self even though she knew (because she'd lived it before) that it would mean her death. That the Doctor was kept in the dark about this gives it that extra bit of tragedy: he'll always think Missy escaping with the Master was an act of selfishness instead of the sacrifice it was. It was also a good use of established character traits and continuity (something that Moffat's era has been light on), pivoting on what was seemingly the core motivation of John Simm's Master: his need to win a victory over the Doctor,. This may have been something introduced by RTD but it was paid off here. This was the way Simm's Master always should have gone down, not stepping in to save Tennant's Doctor at the last moment but trying to one-up his archenemy and get the last laugh.

Speaking of Simm, his was probably my favourite performance in this episode. I mean, there was the humour of him knowingly stroking his goatee as he talked about nostalgia and casually reapplying his guyliner as a siege was about to kick off. That was great. But he was also wonderfully, unrelentingly callous from start to finish, killing his own future self just to deny the Doctor the satisfaction of having saved her. Taking his three performances together I think his is probably the most fleshed out take on the character since Delgado. That final shot of him, slumped on the floor of a lift knowing he's about to die but cackling his head off anyway because he's convinced he's denied the Doctor something, is a perfect send off for that Master.

The supporting cast were... fine, I suppose. There were no standout roles for anyone except the regulars. Even Nardole was clearly an afterthought, understandable with so much continuity kicking about and far more significant characters to write for (and out). I shan't miss Matt Lucas. I still don't really understand, having seen the entire series, why his character was brought back. He seemed superfluous most of the time. The handful of contributions he made to the series' arc could have been handled in a couple of guest appearances. Still, at least he wasn't Matthew Waterhouse.

The Cybermen were... also fine, I suppose. After the effort that was put into reinventing them as exploited, eternally tortured humans in World Enough and Time it was a bit of a shame that they reverted to far more generic Stompy Killer Robots™ this week. It's understandable though. There simply wasn't space in this episode for them to be more. Their starring role was last week and I'm perfectly happy with that. I do find it a bit odd that a species so keenly obsessed with constant upgrading would assemble an invasion force that prominently included old models though.

Which leaves me only Capaldi's Doctor to discuss. This episode very much like a payoff for his time on the show. He got to be clever and brave, choosing to stand and save innocents knowing he couldn't possibly survive himself, which is obviously the endpoint this incarnation of the character was always headed for after his 'Am I a good man?' beginnings. His 'Stand with me!' speech to the Master and Missy, while well-delivered, ultimately felt it was trying a little too hard. I've not doubt it will go down as one of the Twelth Doctor's most remembered moments though, because it was so clearly designed for modern "fandom." If this were his final episode he'd be going out on a high.

1 Look, I know Cybermen technically aren't robots. "Robots" was just a better word for that sentence than "androids."