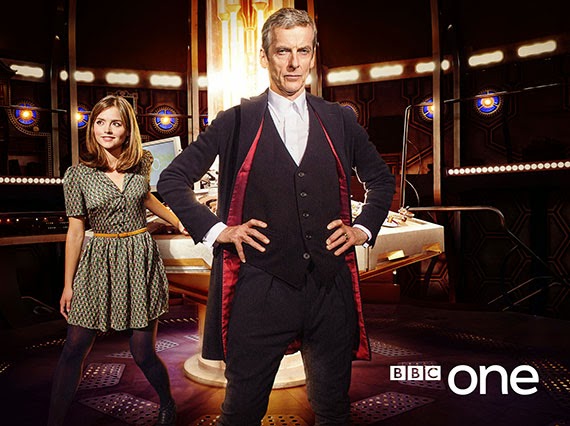 
“I don’t think I know who the Doctor is anymore.”


That exchange and the publicity shot above them are things the BBC thinks we should be getting excited over. To be honest the teaser trailer featuring the two lines of dialogue did nothing for me. The silhouette of Capaldi looked like it was done through CGI and for some reason that really irritates me. Probably because I’d rather have a shot of Capaldi that’s definitely live action.


Still, the teaser does at least support Moff’s natter about the Doctor being more irascible that he’s been since Eccleston though. Which is a good thing. Or at least it is in theory. How good it is in practice is reliant on Moffat being capable of writing a “snarling beast” leading man with empathy. Going on his career history that’s not something we can rely on.


The picture’s more interesting. Because it shows a new TARDIS set. The purple and gold colouring’s pretty nice. It puts me in mind of the secondary console room, even though it really shouldn’t. Perhaps it’s because the walls look like they’re wooden. Perhaps it actually will prove to be based on the secondary console room when we get to see more of it. It already looks nicer than the last console room. The cold, clinical steel look never did anything for me.


Also pretty old school is the control console being white. Because, y’know, until 2005 we’d only ever had white controls in the TARDIS.


All told it looks like a nice new set. But should that really be the thing that I’m most looking forward to seeing when there’s a new Doctor debuting? The answer, of course, is no.


Oh, and the Twelfth Doctor’s debut episode being called Deep Breath? That’s a bit disappointing, isn’t it?
Posted by Dave at 12:12 No comments:


You wait for months and months and then a bunch of Doctor Who news comes along at once. Earlier in the week there were a couple of comments from King Showrunner and Keeper of the Canon Lore Steven Moffat that assuaged fears that he might have stopped overhyping things. Then the week ended with the announcement of series eight’s premiere date, a trailer and a publicity still of Clara and the Capaldi Doctor stood in a new TARDIS.


I’ll get to the series eight stuff in another post. For now I want to look at The Moff’s comments.


As far as I’m aware they stemmed from the page Moffat writes for DWM. The first was a mention of series nine. Yes, that’s the series that will air next year, not the one that will air this year that Moffat should be building interest in (because, y’know, it’s his job). He revealed that he’d just written a “whooper” of a cliffhanger for the series’ penultimate episode.


So we know Moff’s writing the episode, which in turn confirms that he’s intending to stay in charge at least until the end of series nine. While it was the done thing for the lead writer to provide the final two episodes of a series under RTD it’s not always been the case under Moffles. Series six featured a penultimate episode from Gareth Roberts (Closing Time, featuring the return of hilarious scamp Craig Owens) and series seven saw Neil Gaiman in the spot (giving us his take Cybermen and space circuses). It’s incredibly unlikely Moff would entrust another writer with the series finale so it’s looking like he’ll be back to writing the final two episodes himself.


Does this mean a proper two part send off to series nine? Well, it’s possible. But… well, it’s not actually been Moffat’s style since taking over. The Chibnall-penned Silurian two parter and the Ganger debacle in the middle of series six aside Moff has tended towards two parters that have a second half that’s distinct in style, tone, story and (often) setting from the first. It was a trend that developed as early as series two as Russell T and the production team realised that the pacing of two part stories for a modern audience just didn’t work without a significant change coming at the halfway point.


The trait has been accentuated under Moff’s reign. It’s one of the things I think he’s gotten right. It’s not only helped to distinguish his era from RTD’s in a positive way (I tend to find most differences negative, as anyone who’s read this blog before will know) but it’s also made for better two part stories than the Davies era could generally muster.


Also worth mentioning is the fact that series seven featured no two part stories at all. Instead Moffat went with his much ballyhooed movie poster approach, which produced such classics as A Town Called Mercy, Hide, and, of course, The Rings of Akhaten. Moffat made a deliberate move away from two parters, saying he felt the show needed a fresh approach. He was probably right, but that he gave us such an average series without them may have caused someone at the BBC to request they be reinstated. Or perhaps The Moff himself has decided they’ve had enough of a rest. Either way it wouldn’t have done his budgets any good: two parters were introduced by RTD specifically as a money saver.


Of course the real thing we should focus on here isn’t two part stories or that Moffat’s sticking around for at least another year. It’s that overhype’s coming into play again. He’s written a whooper of a cliffhanger has he? Great. It’s not like he’s got a history of letting us down on those sorts of promises…


No, hang on a second. He does. The “game changing” revelation that River was Amy and Rory’s kid is my favourite example but there’s also his promise that we’d find out the Doctor’s name in the series seven finale. I enjoyed his promise that Doctor Who would be all over people's screens in 2013. I could point to more but, well, Moffat’s actually provided some fresh material so let’s focus on that.


His other DWM comment saw him say that it’s never been explicitly stated that the Doctor is not human. Having only sat through a small selection of black and white era stories, possessing only a hazy familiarity with Pertwee era works, and only really enjoying the first half of Tom Baker’s stretch I’m not familiar enough with all of Doctor Who to argue with him. Not that I feel compelled to because to be honest he’s probably right: it probably isn’t ever stated that the Doctor’s not human. But so what? Does that mean Moffat has to write a story (or stories) addressing the issue?


Is it not enough that Time Lords and humans are presented as different species and that the Doctor has always been identified as a Time Lord? Probably not, knowing Moffat. The comment seems to hint (or is at least designed to hint) at Moffat gearing up to present Time Lords as future humans. Which is about the most fanficish story he could go with. I’m reliably informed it was a passé idea in fan circles during the eighties and it’s notable that even when the BBC Books line (which had descended into an awful sort of official fanfic itself by this point) went with the idea they saw the error of their ways pretty sharpish.


The thing is that having Time Lords presented as future humans is something that could be presented as A Big Shock Twist™, quite possibly the Big Shock Twist™ he’s mentioned for series nine’s penultimate cliffhanger. If there’s one thing that can be said for Moffat’s approach to writing and running the series it’s that he has a proclivity towards Big Shock Twists™. I’m not against them in principle. They can work if they’re properly prepared for and people are encouraged to care about the plots and characters involved. But nothing about Moffat’s four years in charge indicates that he understands how to make people care. He just understands how to make people anticipate a revelation, and there’s a massive difference.