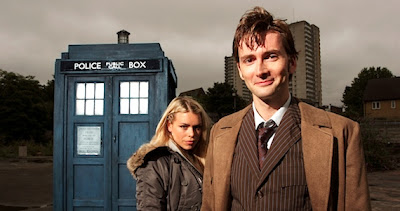 Two hours before Doctor Who returned to TV yesterday the BBC announced that David Tennant and Billie Piper would be guest stars for the official fiftieth anniversary episode. Filming on that starts this week and will air some time towards the end of the year, most likely in the latter half of November. The casting is A Good Thing in that it will see the return of arguably the most popular, and certainly most successful, actor to ever play the part.


The timing seemed off though. When you’re two hours away from launching what is essentially a new series (technically it’s a continuation of the one that started last autumn) the last thing you should be doing is running the risk of upstaging your leading man. Tennant coming back to the part of the Tenth Doctor definitely does that.


I can understand the timing of the decision. Having the announcement of Doctor Ten’s return coincide with the airing of the first new episode of 2013, the fiftieth anniversary year, makes sense. But was there a need to make that announcement before it aired?


I think it would have been better to tack the announcement on to the end of the episode, after or instead of the next time trailer. Filming may not have started but some sort of visual teaser could’ve been cobbled together from the more than ample amount of existing footage of Tennant and Piper in the show. Even a simple announcement would have been fine. That would have insured the news reached more Who viewers, the only people even remotely interested in this news, than something being released at four in the afternoon and would have avoided upstaging Matt Smith’s performance and the (proper) introduction of Jenna-Louise Coleman as the new and instantly generic companion.


Like I say, the move to bring back Tennant is A Good Thing. It’s going to create the feeling of event television that most people seem to think is necessary for the official anniversary episode. That feeling is never going to be adequately met but Tennant’s involvement will get the production team closer than they’d come otherwise. The other option they had, bunging all the major villains into a single hair raising tale, was already frittered away on The Pandorica Opens, Moffat’s first dire attempt at an all-singing, all-dancing season finale.


Realistically it’s hard to imagine what Tennant and Piper are going to be given to do. A few in-jokes from Rose about having witnessed regeneration before and some sniping about “the new model” from the Tenth Doctor seem like a safe bet. But if we want that sort of thing all we have to do is jam The Three Doctors into our DVDs players. Every other multi-Doctor story since has just been a riff on that flimsy theme.


Is there a plot out there that could necessitate a multi-Doctor story, or at least make it funny or give it a fresh spin? Absolutely. But based on his current body of Who work I do not think Steven Moffat, familiar bag of tricks and all, is the man to give it to us.
Posted by Dave at 18:04 No comments: