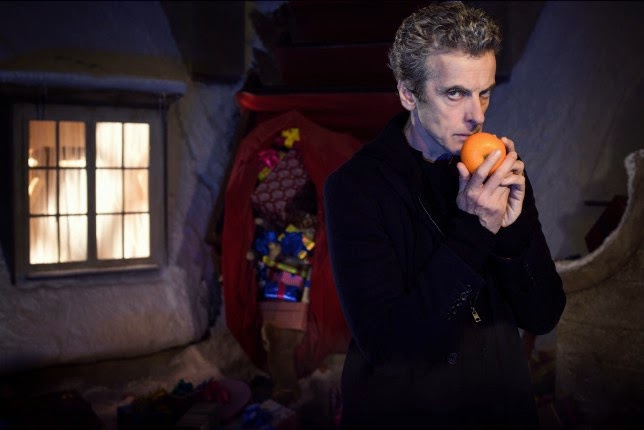 When I first watched Last Christmas it seemed fairly innocuous. Some stuff happened, there were some laughs, and Clara and the Doctor made friends after having a Grown-Up falling Out at the end of series eight. But after I'd finished watching it I couldn't remember anything specific about it. Since then I've watched it a further two times in an attempt to work out the specifics of the story, the "stuff" that happens.


It's a difficult task. When Christmas specials first hit Doctor Who then-showrunner Russell T Davies made the sensible decision to tailor them to an audience that was not paying attention. Because on Christmas Day kids have new toys to play with, adults have booze to drink, and a fair number of people are being subjected to Doctor Who rather than choosing to watch it. Even when a Christmas special coincided with a Doctor debuting or leaving RTD managed to keep things relatively light. He’d smuggle things in for the fans but the plot was always simple, the threat always obvious and the resolution always happy.


Steven Moffat doesn't use this approach. His Christmas specials are like any other episodes but with festive motifs and framing tossed in where possible. It’s because he and Davies view the programme in completely different ways. RTD wants it to be about people and their relationships. Moffat wants it to be about ideas.


Personally I don't think there are enough things on TV (particularly the publicly funded BBC) that focus on ideas over character. More things like Moffat's Who wouldn't go amiss. But saying that isn't the same as saying Moffat's approach is right for this show. It isn't. It obviously isn't, because a flagship BBC drama is not the place to focus on ideas over characters.


And Moffat just as obviously knows this. That's why he never fully commits to episodes about ideas. But he doesn't move away from his idea focus either. This leaves us with Christmas specials that are an awkward mix of Moffat's preferred approach, Big Ideas™, and what the BBC want from a big budget drama, characterisation. In trying to accomplish two things at once he doesn't manage either to a satisfying degree.


This episode seemed designed to mix the best of Alien and Inception. That’s an odd combination anyway but it’s particularly strange that it was chosen as the basis of a Christmas episode. But then, as I’ve already pointed out, Moffat doesn’t seem particularly bothered with differentiating his Christmas episodes from his regular episodes in anything beyond the most obvious ways possible.


Which neatly brings us to the inclusion of Father Christmas. It’s an obvious idea but that doesn’t make it a bad one. It’s the sort of things Doctor Who can do well: make Santa a living, breathing, real person. It’s surprising that someone as avowedly in favour of Christmas episodes being Charistmassy as Russell T Davies is didn’t get round to the idea when he was in charge. It’s a simple, easy-to-follow concept and it holds a particular interest for kids (of the right age).


Sadly Moffat didn’t really do much with Santa. He made some funnies, revealed a dark edge and then dropped out of the episode, reappearing sporadically whenever a plot device was needed. By the end it was left unclear whether he’d even been real or not. The air of mystery was welcome. The half-hearted way Moffat used the character for the majority of the episode was not. It was a misfire and spectacularly wasted opportunity to explore the modern concept of Christmas using a world renowned, public domain character.


The layered dream sequence approach is what really made this episode feel generic. Had it been stripped of Santa and the vaguely Christmas setting it could have been comfortably moved to the middle of a series without any problems.


This dream sequencing stuff is, of course, what led to one of the most awful scenes of the episode: Clara waking as an old woman and accepting that she was close to death. Except of course she wasn’t: she had a Dream Hugger attached to her face making her think she’d lived a full life without the Doctor and was near death. I suspect the scene was included to play into the rumours (which Moffat had helped fuel) that Jenna Coleman would be leaving the show. I wouldn’t be surprised if he’d had two endings in mind, one for Coleman staying and another for her leaving, in which Clara did actually die of old age. The return of the wooden Samuel Anderson as Danny Pink (for the record I think this was his worst ever performance on the series) was practically welcome by comparison.


Basically there were a lot of things that were worth including here. Father Christmas, the dreams within dreams, and the creepy aliens all had something to offer. But, as I’ve written before about Moffat episodes, too much was crammed into too short a time. You have to wonder what exactly was “special” about this Christmas special.
Posted by Dave at 18:27 No comments: