The Eaters of Light 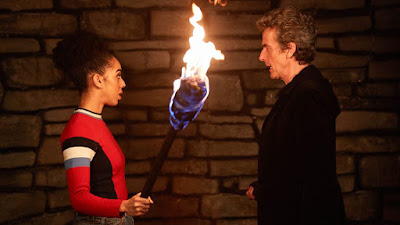 So here we are. Another mystery of the world solved by Doctor Who. Turns out the Roman Empire's Ninth Legion didn't simply disappear from records. No, they teamed up with a Pict warrior and walked into a blue portal buried in a hill to fight light-scoffing inter-dimensional tentacled dinosaurs. Obviously.

This is an annoying habit of the Doctor Who has had going back years. Taking some real world unexplained event and attaching some fantastical explanation to it. It's not exactly a problem but it does always leave me feeling a bit unsatisfied. It's a misunderstanding of the Doctor Who formula that works well: normal everyday things given a fantastiscal twist. It doesn't work as well because things like the Roman army, Agatha Christie's brief disappearance, and the great fire of London are not everyday things. They are historical events, and so they hold a different place in viewers' minds. I understand the reasoning behind doing episodes like this: it makes a good subject for a forty-five minute story and the BBC will find it easier to market with a clear hook. Still, it's still an approach I don't much care for.

Which isn't to say that there were no mysteries in this story. The stuff created for the show, such as the inter-dimensional portals, the specifics of the Picts' history defending the hill, and how ravens could talk, were left unexplained. The absence of explanations for every little detail was very nice. It partially, but not completely, made up for the appropriation of a historical mystery for a forty-five minute sci-fi drama1.

I liked most other things about the episode though. I can mostly sum up what I liked by mentioning Rona Munro. I appreciated her not feeling the need to go into tedious and unnecessary details about the fantasy elements she introduced and she gave the Twelfth Doctor more good lines than he's had outside of a Steven Mofffat script. The general approach to writing him seemed to be more season eight than the lighter approach we've had since. Which, as I said a week or two ago, is an approach that I think plays to the actor's strengths and allows his Doctor to stand apart from his two immediate predecessors. Capaldi responded with a typically excellent performance, one that I think will probably be remembered as amongst his best. It certainly strikes me as one of the best "non-big event"2 episodes he's had.

Bill was given material of equal quality. Whether she was awkwardly letting down a (bisexual) Roman, bravely swallowing her fears and rallying a group or soldiers, or displaying a passionate interest in European history she (again) felt more like a real character than Clara or Amy ever did3. Pearl Mackie was as good as she has been all series. I feel like I need to reiterate that it's almost a shame she was cast as a companion character, even one as likeable and important to casting progression in Doctor Who as Bill, because she would have made a tremendous replacement for Peter Capaldi.

The other elements of the show were a mixed bag. The location filming took in some inspired views, which has to be considered a good thing. The set designers had it a little tougher as they were stuck building wooden huts and stone cairns. What they built looked convincing but dark rooms made of wood are never going to impress anyone on this show. The design of the light-eating locusts was good. Murray Gold got a bit carried away at points, particularly when the Doctor was staring into the rift. I half expected the camera to swing round to reveal he was staring at an orchestra the music was so intrusive. It works well, but he needs to calm it down at points. But overall his work was good too. It's never actively bad, just a little overbearing.

Basically, Rona Munro gave us a good episode from what I feel is a flawed premise and everyone else on the team did their bit. I'll refrain from talking about how a McCoy era writer has been invited back to the show while Terrance Dicks, the script editor for the much celebrated Pertwee era and the man who helped cast Tom baker, hasn't written a script for the show in decades.

All we need now is for Ben Aaronovich to make his triumphant return to the show.

1 I'll just note here that I fully expect for this Real Life Mystery approach to be used in the future in an episode I end up really enjoying. I'll forget my distaste for the approach then because I'm contrary like that.

2 The big event approach is one of the main reasons I think I've not enjoyed Moffat's time as showrunner as much as I might have. But that's a thought for another time.

3 Want to leap to the defence of these two companion characters? Name any of their interests outside of their friendships with the Doctor and relationships with Rory and Danny. Go ahead. I'll wait. Answers on a postcard...
Posted by Dave at 12:37